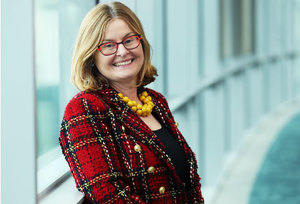 Construction fatalities have more than doubled in the last year, it has emerged, as the latest figures released by the Health and Safety Authority (HSA) show there were 46 deaths in the workplace in 2019.

Provisional data today (Friday, January 10) show an 18% rise from the previous year when 39 people died. Chief Executive Officer of the HSA, Dr Sharon McGuinness, expressed concern that construction deaths had increased from five in 2018 to 12 in 2019, with 75% of all fatal injuries taking place in the last six months.

With falls from heights the leading cause of all construction worker deaths last year, she highlighted the Authority’s concern that many of the fatalities involved small companies and self-employed tradespeople.

“The figures show that the number of construction deaths have increased to levels not seen since they last spiked in 2015, when falls from a height were also the biggest trigger in fatal injuries.

“This is a worrying trend and shows that without proper risk assessments and health and safety considerations, ultimately a worker may pay the price with their life,” Dr McGuinness warned.

She said that the HSA’s provisional statistics show that the rate of construction fatalities has increased considerably in the last year from 3.5 per 100,000 people employed to approximately 8.2 per 100,000.

“Construction workers engage in many activities that may expose them to hazards, such as falling from a height, unguarded machinery or being struck by construction equipment.

“Our provisional data also shows that 940 non-fatal incidents and dangerous occurrences were reported to the HSA from the construction sector in 2019.

“While the message seems to have got through to big construction firms who have improved standards around worker safety, what we are seeing is self-employed and smaller building companies not realising their duty and responsibility to staff, and cutting corners when it comes to health and safety.

“We plan to target working at heights throughout our construction safety campaigns this year, and will also engage directly with the sector to increase knowledge and application of risk assessment tools to be used on all sites.”

Predicting that incidents and deaths will continue to rise until there is a change of mindset, Dr McGuinness said: “Most deaths are preventable. Generally, incidents occur when safety shortcuts are taken. But the mentality of placing people's lives in peril in the race to finish a job - or save money - needs to stop. Lives depend on it.”

The annual data also found that farming was still the most dangerous sector, with 18 fatalities in 2019, followed by construction and transportation and storage, accounting for 12 and six deaths, respectively, last year.

As almost three in every four farm fatalities last year involved people 60 and older, Dr McGuinness said farmers must recognise their limitations as they age which may affect their ability to work.

“As farmers get older, they must adjust their work practices to make sure that they avoid injury. 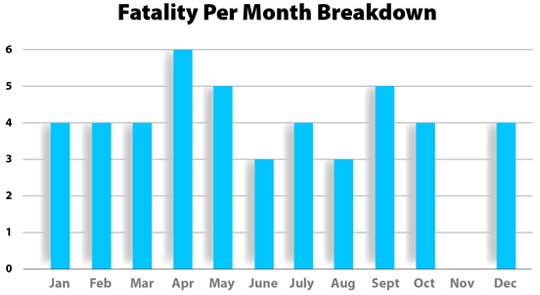 “I would urge people to really take on board the dangers around farming whenever working with livestock, slurry or machinery.

“Farmers think it’ll never happen to them but sadly as we have seen, all it takes is a few seconds for a serious injury or death to occur,” she said.

Dr McGuinness also expressed concern at the issue of health and safety in the country’s ports and docks, with five deaths in 2019, one more than in 2018.

“These tragedies prompted the HSA to launch a national inspection campaign in October, which focused on the management of health and safety during vehicle movements in docks and ports.

“Employers must demonstrate from the top that no job is worth a loss of life, injury or illness. This message is especially important as we face into Brexit with more activity expected in shipping and ports.”

Meanwhile, the provisional data shows that Wexford had the highest number of fatal incidents, with seven fatalities in 2019. 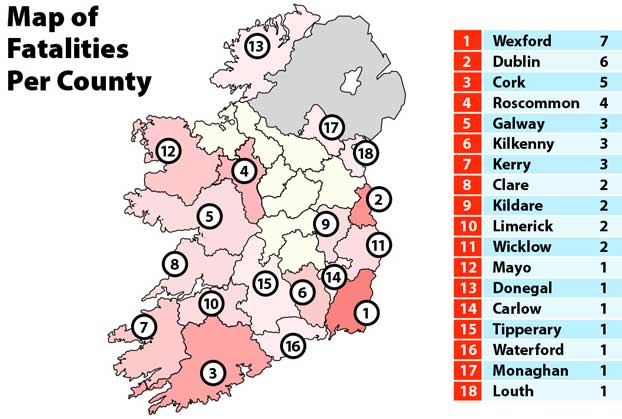 As statistics have a way of obscuring the personal tragedies that lie behind the numbers, Dr McGuinness said that the toll of workplace injury, illness and death remains too high, and many workers remain at serious risk. 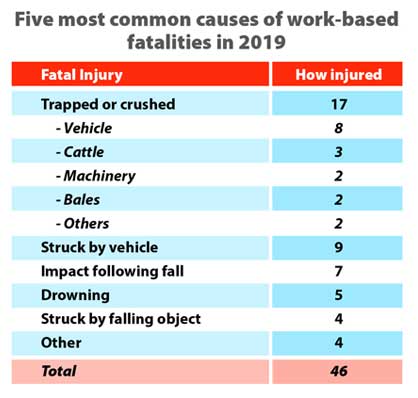 “Although, we have seen a downward trend between 2015 (56 fatalities) and 2018 (39 fatalities), action still needs to be taken to ensure that every worker goes home safely each and every evening.

“We must not become complacent as we continue our mission to prevent injury, death and ill health at work,” she concluded.

For more information on HSA figures for 2019 and previous years, visit the HSA website HERE or carry out your own free risk assessment with the BeSMART tool HERE.